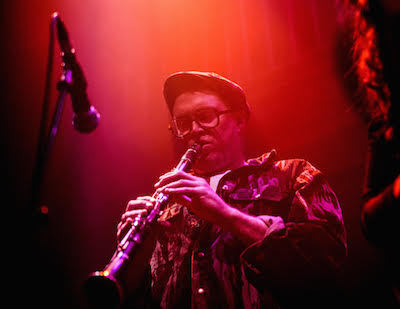 Adrian Cox was one of the very first performers at the Arts Centre back in January 2018. He’s been back twice since then, and these have all been some of the most stunning gigs we’ve hosted.

He’s joined again by the sensational pianist, Joe Webb, and – making his first appearance – guitarist Denny Ilett, who for many years accompanied New Orleans singer Lilian Bouttée, and is another outstanding musician.

“He is truly a musical force of nature, and one of the most stunning and entertaining performers I’ve ever seen, anywhere!” Andy Williamson, Arts Director, Ashburton Arts Centre

“After a two year absence from touring under his own name, internationally acclaimed jazz clarinettist Adrian Cox is performing on the scene fresh from recording 2 new albums. The first album features long time collaborator Joe Webb as a duo and the second is a very special album that features for the first time Adrian and his band alongside a string quartet. The duo album is available to purchase online & on CD but you will have to wait until later in 2022 for the strings project to be released. Adrian will be bringing members of the band from the strings album to Ashburton this evening featuring Joe Webb (piano) Denny Ilett (guitar) Will Sach (double bass) & to play some of the new music as well as some reworked standards.”