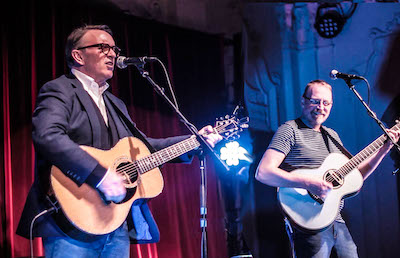 Last week, Chris Difford was advised by his doctor not to go on tour until after he’s had an operation. We’re planning to reschedule this show for either on 21 or 22 December 2022 – to be confirmed very soon. Anyone who’s already bought tickets has been sent an email from tickets@wegottickets.com offering a refund, or to hold the tickets for the new date.

Two of the finest singer-songwriters in the UK here in Ashburton on the same bill.

Chris Difford, Glenn Tilbrook and Jools Holland formed Squeeze in the mid 1970s. Chris and Glenn  wrote the songs that regularly took  Squeeze into the top 10, including classics like Pulling Mussels (From the Shell), Cool for Cats and Up the Junction.

Boo Hewerdine is perhaps best known from his years fronting much loved English rock band The Bible but he has since enjoyed a solo career spanning over two decades and written thousands of songs including those for Eddi Reader, Sia, Chris Difford, Kris Drever and KD Lang.