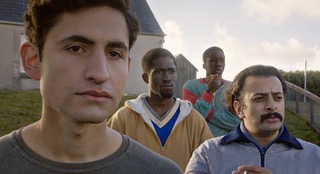 Written and directed by Ben Sharrock and starring Amir El-Masry (The One, Industry, Jack Ryan, The Night Manager), Limbo is a wry, funny and poignant cross-cultural satire that subtly sews together the hardship and hope of the refugee experience.
Set on a fictional remote Scottish island, it follows a group of new arrivals as they await the results of their asylum claims. Among them is Omar (Amir El-Masry), a young Syrian musician struggling with the guilt, regret and grief that comes with leaving his former life behind.

‘Witty, poignant, marvellously composed… Ben Sharrock announces himself as a master of atmospheric film-making’ The Guardian

This deadpan comedy-drama from a bold new voice in British cinema shines a light on the hearts and lives of those at the centre of a crisis that is often experienced through news headlines alone.

Reflecting the complexity of the movement of people across borders has been along-held passion for Sharrock, who spent time working for an NGO in refugee camps in southern Algeria and living in Damascus shortly before the outbreak of the Syrian civil war.
There, he formed a network of friends whose personal stories inspired Limbo.