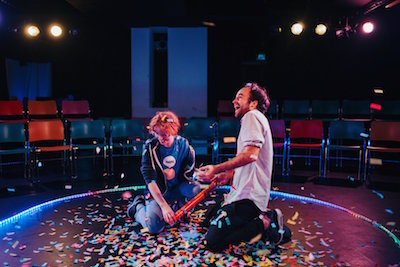 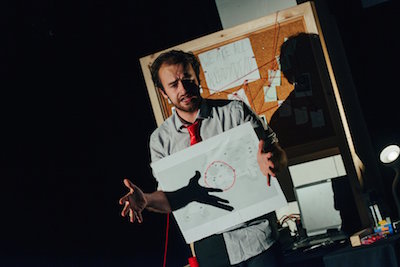 Fireworks is an experimental piece of new writing exploring the dichotomy of whether the connections we make in life form through fate, or are random events in a chaotic universe. Paralleling two narratives in two timelines, this is a story about love, faith and the science behind CERN’s Large Hadron Collider.

Here’s an interview about Fireworks with its writer, Alex Robins.

And here’s an interview with Alex and director Jack Bradfield on PRSD.

And some tweeted reviews after the (sold out!) performance in December at Plymouth’s Theatre Royal:

@Sam_Hunter9  Dec 21, 2019: Can’t find enough praise for #fireworks tonight at
@TRPlymouth. A beautifully crafted show with a captivating relationship between the characters. Smashed it out the park @FireworksShow@JMStevensActing
@alexmccauleyuk Dec 21, 2019  really brilliant play by @NotAlexRobins and performance from @JMStevensActing, incredibly proud to see my mates out here smashing it, to all my south west/London friends this is definitely a show worth catching.
@Alice39967158 Dec 21, 2019 Big up all those involved in @FireworksShow ! Such beautiful craftsmanship between @Grainne_OMahony  and
@JMStevensActing. Congrats all involved!! P.S Loved how I’ve come away learning something really cool also (no spoilers, book to find out) 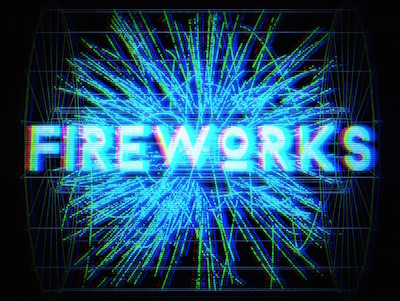 Developed with support from Theatre Royal Plymouth, Plymouth University and Down Stage Write.

Tickets £11 or £8 or £5  Book Here or at Rafikis (next door) or at Ashburton Information Centre or email boxoffice@ashburtonarts.org.uk to reserve and pay in cash on the door.