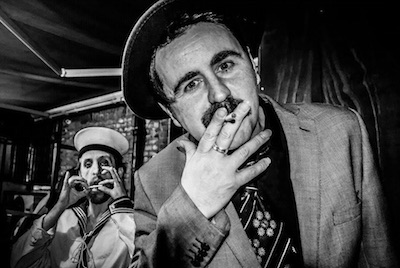 Gabriel Moreno is a singer songwriter and poet with more than 10 poetry books published in both Spanish and English from 2007 to 2015 with Omicron Publishers and Annexe, London. He has released two albums with Amber Records, UK, Love and Decadence 2015 and Farewell Belief 2017, expressing creations of his own strand of Alternative Folk with a Mediterranean touch. He is considered an heir of the western troubadour tradition under the influence of songwriter greats such as Leonard Cohen, Nick Cave and Bill Callahan. He is also artistic curator of The Lantern Society, London and The Poetry Brothel London (two highly acclaimed nights of music and poetry in the UK).

He’ll be appearing with a trio version of his band, the Quivering Poets!

Doors and bar open 30 minutes before the show is due to start.

“One of the best small UK music venues” The Guardian

Free parking after 6pm and all day Sunday in the Town Car Park behind the Town Hall, and in the Grey Matter compound on Chuley Road.