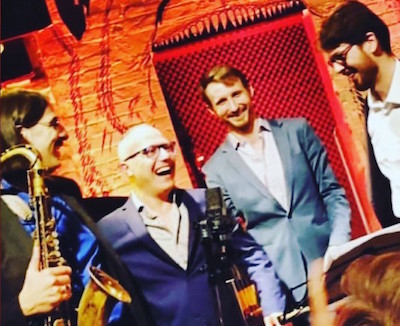 “It isn’t often you discover a performer whose creative ability takes your breath away in the first 30 seconds of hearing their music… Marco is a breath of fresh air for…Jazz fans everywhere” JazzBitesRadio.com

A native Italian from Umbria, Marco Marconi initially studied classical piano before moving on to study Jazz at the Music Conservatory of Perugia. After establishing himself as one of Italy’s leading jazz pianists, his subsequent highly successful appearances at the Cheltenham Jazz Festival in 2009 and the Lancaster Music Festival in 2011 prompted his decision to move to the UK permanently in 2012. Working primarily with his own trio, Marco was signed to the iconic UK label 33Jazz, which released his first two albums “Nordik” (2016) and its follow up “Trialogue” (2018), both to critical acclaim.

For his last record ‘New Roads’ Marco invited one of Italy’s best-known saxophonists the multi-Award winning Max Ionata (Robin Eubanks, Steve Grossman, Mike Stern, Bob Mintzer, Mario Biondi…) to collaborate with him. In Marco’s words this resulted in “a big injection of swing” into both the album’s original compositions as well as the standards and popular songs rearranged in a jazz style which also feature on the CD. Combining Marco’s classical background and jazz sensibilities with Max’s incomparable, swinging, fluent playing this show promises to be quite special.

“It isn’t often you discover a performer whose creative ability takes your breath away in the first 30 seconds of hearing their music… Marco is a breath of fresh air for…Jazz fans everywhere” JazzBitesRadio.com; “An inspirational feast of stylish…jazz” Stratford Jazz; “a remarkable musician” Cheltenham Jazz Festival; “Ionata….Italian jazz ace” Something Else; “Ionata…elegant and rich in taste” All About Jazz

To give you a flavour of ‘New Roads’, here below are the links to four video clips:

“Marco Marconi is a remarkable musician possessed of rare talent… catch him if you can, you are in for a rare treat!” Alan Bates, Candid Records

“It isn’t often you discover a performer whose creative ability takes your breath away in the first 30 seconds of hearing their music. A style so innovative in concept and contemporary in style, established Jazz artists you’ve come to know and enjoy over time are pushed aside to accommodate a musical sensation so rare you’re knocked off your feet immediately.” Anthea Redmond, founder JazzBitesRadio.com

“I think everyone that heard Marco play was very impressed and I was also overwhelmed by his dedication… Marco is a remarkable musician and made a big impact on us this year.”
Steve Symons, Cheltenham Jazz Festival Manager 2009

“An inspirational feast of stylish contemporary jazz this remarkable trio had the audience spellbound from the onset with Marco’s original compositions interspersed with jazz standards.”
Roy Stevens, Stratford Jazz