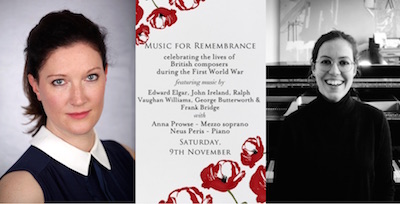 £13 or £10 or £6 – you choose. Tickets from wegottickets.com/ashburtonarts (10% added), Rafikis, Ashburton Information Centre.

Join mezzo soprano Anna Prowse and pianist Neus Peris in a programme of music composed around the time of the first world war a hundred years ago.
Elgar, Sea Pictures
Ireland, Sea Fever
Ireland, Blind and The Cost from Two Songs
Ireland, The Soldier
Butterworth, Loveliest of Trees, from A Shropshire Lad
Butterworth, The Lads in their hundreds, from A Shropshire Lad
Vaughan Williams, Four Last Songs
Vaughan Williams, The New Ghost
Bridge, The Devon Maid
ANNA PROWSE was a choral scholar at Girton College, Cambridge, studying English Literature before completing her training at Trinity Laban Conservatoire in 2018 where she studied with Sophie Grimmer and was the recipient of the Joan Greenfield Scholarship. She won first prize in The Elisabeth Schumann lieder competition and second prize in both The English and French Song competitions.
Opera highlights this year will include Donizetti’s Anna Bolena with Longborough Opera Festival and Elfyn Jones’s Vicky and Albert with Sonopera following its success last summer at Tête à Tête’s opera festival. On the concert platform Anna has sung at The Leeds Lieder Festival and as a soloist for Eugene Asti’s Schumann and Debussy concert series. Her oratorio repertoire includes Verdi’s Requiem, Mozart’s Requiem, Rossini’s Petite Messe Solenelle and Handel’s Messiah. Opera roles also include, Bianca in Britten’s Rape of Lucretia (Stratford Circus Theatre), Dido in Purcell’s Dido & Aeneas (Blackheath Halls Opera), Alto soloist in Purcell’s King Arthur (Frithy Tippett opera), Mother in Menotti’s Amahl and The Night Visitors (Yorke Trust Opera), Polina in Tchaikovsky’s Queen of Spades (Opera Coast), Nerone in Monteverdi’s, L’incoronazione di Poppea (Blackheath Halls), Joachim in Handel’s Susanna (Yorke Trust Opera) and Fairy Queen in Gilbert & Sullivan’s Iolanthe (London Garden Opera).
NEUS PERIS is emerging as an exciting artist thanks to her sensitivity and great communicativeness in concert. Her imagination and deep musical understanding allow her to share a persuasive insight and to perform with real abandon. Full of curiosity, she has built up an eclectic solo repertoire that covers Rameau to contemporary music. Neus has also developed a solid reputation as a collaborative pianist.
She’s been collaborating regularly with mezzo-soprano Anna Prowse since 2016, and has extensive experience with vocal repertoire. Together with soprano Aimée Presswood, they received the First Prize in the English Song Competition 2017, and were joint winners at the Elisabeth Schumann Lieder Competition 2017, both at Trinity Laban Conservatoire of Music and Dance in London.
Other recent partnerships include a project for Borough New Music, giving a wolrd premier of a comissioned work by KC Cheng alongside presenting music by Green, Wilson and Finch. Next projects include a solo concert for Tilford Bach Society with works by J.S.Bach, and a solo recital for Christmas in Barcelona, with works by Mompou, Schubert and Ravel.
Originally from Barcelona, Neus has been based in London since 2015, where she has completed a Masters Degree at Trinity Laban Conservatoire of Music and Dance. She has had the privilege of receiving advice from many inspiring musicians such as Douglas Finch, Derek Aviss, Eugene Asti, Malcolm Martineau, Pascal Rogé and Rivka Golani, to name just a few.