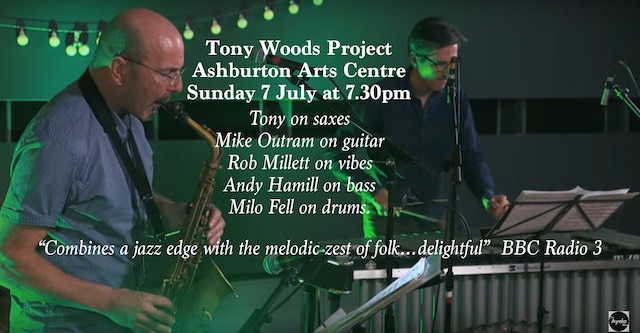 The TWP tells its own story, with influences of rock, groove, jazz and folk, but always with an emphasis on lyrical melody. The band has received great critical acclaim for its first three albums: High Seas, Lowlands and Wind Shadows. Featuring Tony on saxes, Mike Outram on guitar, Rob Millett on vibes, Andy Hamill on bass and Milo Fell on drums.

“A wonderful recording by one of the most interesting and thoughtful groups
on the British jazz scene.beautiful-highly recommended”
(Kyle Horch, Clarinet and Saxophone Magazine)

Find out more about the band at https://tonywoods.org/ and
https://soundcloud.com/tony-woods-8/air-extract-by-tony-woods