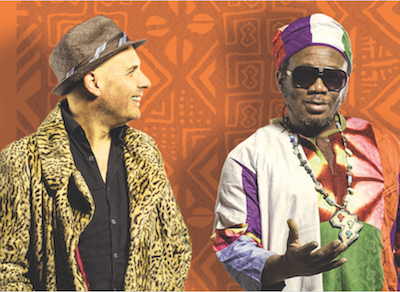 TwoManTing was formed in 2004 when Sierra Leonean drummer Jah-man Aggrey, and guitarist Jon Lewis were playing together as part of dance band, Le Cod Afrique, at venues such as Montreux Jazz Festival and WOMAD.
The duo immediately became a hit on the UK festival circuit with their brand of bouncy “Sunshine Afro-roots”. Shows have included Glastonbury, Secret Garden Party, Wilderness and Green Man Festivals to name but a few. Using guitar, live loops and percussion the duo creates a highly danceable full band sound and their reputation has earned them recent support slots with the likes of Tinariwen, The Oyster Band, Edward 2 and Dub Colossus. Their music is often featured on BBC Radio 3 and 6Music.
Shows feature palm-wine, acoustic dub and highlife grooves with thoughtful and thought-provoking lyrics on subjects ranging from childhood memories, political protest and er….duvets.
The new album “Rhymes with Orange” draws on a range of sounds from 1970s Sierra Leone to 1980s UK punk through to the Soukous beats of the Congo.
“Brilliant – if you want a bit of early summer, then get this into your ear-holes!”
(Lauren Laverne, BBC 6Music)
“Full of such bright tuneful moments, this really takes off in an intimate live setting” (fRoots Magazine)
“John Peel would play something like this on his programme and the world would suddenly seem a better place”
(Steve Lamacq, BBC 6Music)
twomanting.co.uk
Doors and bar open at 7pm. Show starts 7.30pm