London, 1948 – The Ministry of Biscuits casts its sinister shadow over every tea-time and elevenses in the land. Established to “control biscuits, and to control the idea of biscuits,” it prohibits decadent sweetmeats, such as the Gypsy Cream.

But when Cedric Hobson, a junior designer, falls in love and designs a biscuit to “shake confectionery to its very foundations,” his world – and the ministry – are turned upside down. 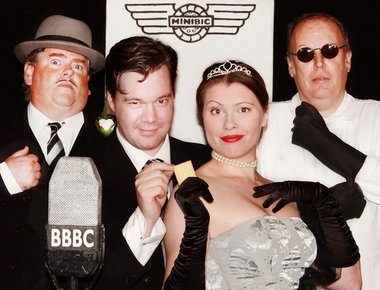 Can we stage a full professional touring musical in the Arts Centre? These guys think we can! Come along and find out.

The Ministry of Biscuits is a unique collaboration between the acclaimed, Carnegie-Medal-winning author, Philip Reeve, whose best-selling novel ‘Mortal Engines’ is currently being filmed by ‘Lord of The Rings’ director Peter Jackson, and the award-winning playwright and composer Brian Mitchell (‘Those Magnificent Men’ and ‘Big Daddy Vs. Giant Haystacks’), with a filmed section by international film-maker Ben Rivers.

First performed twenty years ago to great acclaim, the Foundry Group is touring this well-loved show in a new production and we’re lucky that it’s stopping here on the way to Cornwall for our first taste of something theatrical in the big old chapel.

The music is heavily influenced by British Light Music and the Ealing comedies of the 1940s and ’50s, but with a dystopian twist.

Listen to highlights from the show on Bandcamp

“Wonderfully done, delightful and one of the best family shows on the fringe.”
The List