Duncan Chisholm effortlessly evokes a background steeped in the rich highland music tradition through his rich, varied compositions. Having been described as ‘one of the most authentic interpreters of traditional highland music.’ his fiddle playing takes you on an emotional journey through the beautiful landscape which inspires him. 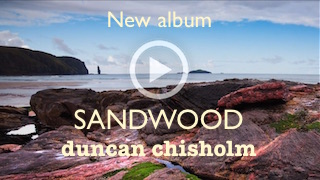 His lastest album, Sandwood, explores the specific area of Sandwood Bay and chronicled his own personal journey through the Highlands to this place of beauty, which became his muse. Sandwood contributed to Duncan winning Composer of the Year 2018 at the MG Alba Scots Trad Music Awards, the album itself was awarded Album of the Year 2018.

Chisholm has had an illustrious career spanning decades. As a founding member of the highly successful folk-rock band Wolfstone, to writing music for the Oscar winning film ‘Good Will Hunting’, Duncan has continued to release albums to critical acclaim. He has been commissioned by the BBC to create soundtracks for the BBC 2 documentary ‘Castle Commando’ as well as BBC Scotland’s ‘Landward’, alongside numerous plaudits from the BBC Radio 2 Folk Awards.  Duncan continues to sell out venue after venue, tour after tour.