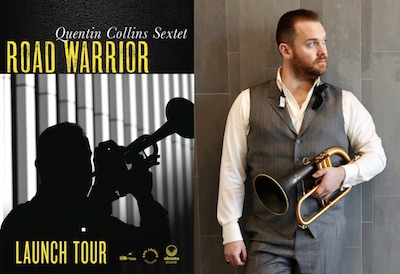 Video of the band: studio session – The Hill and Spice of Life Promo.

“A Trumpeter whose style is a sizzling update  of the Morgan/Hubbard approach .” MOJO Magazine
Brought up around the sounds of jazz by a music-loving father, Quentin had seen many of the greats by a young age, including Dizzy Gillespie, Lionel Hampton & Dave Brubeck. This had a profound influence upon his decision to become a professional musician.
In 20 years as a professional, Quentin has established himself as one of the UK’s top Jazz/Commercial trumpeters, having performed, toured and recorded with a plethora of internationally renowned artists across many genres. These include Fred Wesley, Gregory Porter, Mark Ronson, Kyle Eastwood, Omar, Basement Jaxx, Roy Ayers, Alicia Keys, Dennis Rollins and Mulatu Astatke.
Quentin released his debut solo album, ‘If Not Now, Then When?’, on SunlightSquare Records in 2007. It received much critical acclaim:

“Proving that Collins knows a thing or two about good song writing, ‘If Not Now, Then When?’ is an impressively intense debut.” Jazzwise Magazine

“This debut album by England’s top young trumpet master is breathtaking from start to finish, and is sure to catapult Quentin to stardom and yet more critical acclaim.” HMV Magazine

MOJO magazine voted ‘If Not Now, Then When?’ one of its top jazz albums of 2007.
Quentin co-leads QC/BA, a Hammond-organ quartet with tenor sax titan Brandon Allen. QC/BA released their latest album, ‘Beauty in Quiet Places’, in September 2015 on Ubuntu Music. Some of the comments by the critics are below:

“Provides the listener with a dazzling array of solos from all four musicians, especially the two leaders.” UK Vibe Magazine

“From the up-tempo flavour of Fuerteventura through the foot stomping Handshake to the full-on workout of Modal Tranesition, the listener is instantly gripped by QC/BA’s thrilling slant on the post-bop tradition.” UK Vibe Magazine

“Superb album…absolutely contemporary and of the moment.” Jazz Views

QC/BA’s debut album, ‘What’s It Gonna Be?’, released in May 2011 on Sunlightsquare Records, was greatly acclaimed by the critics.

“This talented quartet get the full five stars, not only for performing brilliantly here but also for playing the type of jazz few can master, namely bright, tuneful neo-bop originals that swing from start to finish.” Jack Massarik, Evening Standard

For five years, Quentin has toured the world extensively with the Kyle Eastwood Band. Their latest album, Time Pieces, was released worldwide on JazzVillage in April 2015. ‘Time Pieces’ was the follow-up to 2013’s highly acclaimed release, The View From Here. Quentin is prominently featured as a performer and a composer on these two recordings.
For some time, Quentin hosted a twice monthly residency at London’s Ronnie Scott’s Jazz Club with his quartet, featuring Andrew McCormack on piano and Gene Calderazzo on drums.