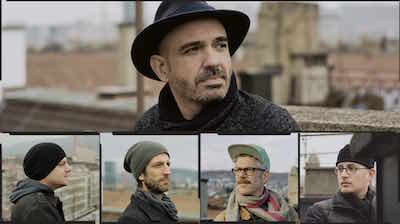 With nonchalant ease, the jazz quintet ROOFER, founded by the Swiss double-bass player and composer Luca Sisera, performs a balancing act between the avant-garde and an awareness of tradition. The band has impressively demonstrated this in their albums “Prospect” (2015, Leo Records) and “Moscow Files” (2017, Leo Records), which garnered considerable praise in the international specialist press. After numerous tours, festivals and concerts, ROOFER has made a name for itself, across national borders and far beyond, as an audacious and playful jazz collective that is keen to experiment. Even outside Europe, namely in Russia and China, this agile quintet has effortlessly played its way into the hearts of its audience.

Intricate rhythms, fast-paced parts in unison, latent swing fantasies and anthemic soundscapes serve these five renowned jazz musicians as an improvisational plateau on which to play. This gives rise to complex and innovative music that is as liberated as it is conscious of form, and remains equally challenging for the musicians and the audience. Thus, it is no surprise that the extreme climbers who also call themselves “roofers”, those who climb around on the world’s tallest buildings without safety ropes, but with sophisticated techniques, know-how, experience and an immense love of adventure, act as metaphorical role models for this band. www.roofer-music.com

“…you can never be exactly sure where the tunes are headed, but you can trust this unit to make the process a hell of a lot of fun. Unpredictable right up to the end!”
Stu’s Record Room, Suart Kremsky, USA

“Capping off the “Swiss Night” was Luca Sisera ROOFER, who impressed with adventurous variations on the theme of Mingus-like aesthetics.” Downbeat Magazine, Josef Woodard, USA

“Indeed, an attention-grabbing program that only gets better on repeated listens!”
All About Jazz New York, Glenn Astarita, USA

For a good 15 years, Luca Sisera has been a sought-after bassist in the Swiss jazz and improvisation scene. Musically, he likes to operate in the charged environment between composition and improvisation. He is frequently seen on stage at various festivals and jazz clubs across Europe in over 100 concerts each year, whereby some tours and concerts have already taken him to Egypt, China and America. To date, he has been involved in over 30 audio releases. Most recently, Luca Sisera has also started working as a composer for his own quintet “Luca Sisera ROOFER”. As interdisciplinary projects have always interested him, Luca Sisera has also worked with authors, cabaret artists, dancers and visual artists, among others, as well as on theatre and film productions. www.lucasisera.com

Michael Jaeger has been active in the Swiss and European jazz scene since 2004. He is quick to attract attention via the individuality of his improvisation style and his playing concept. To date, his jazz musicians’ collective Michael Jaeger KEROUAC has released three CDs of Jaeger’s music on the renowned label Intakt Records and has played concerts all over Europe. His tours have also taken him to Egypt, the USA and China. Numerous projects in the fields of dance, theatre, electronics, film and literature. Collaborations with Tom Rainey (dr), Greg Osby (as), Urs Leimgruber (ss, ts), Hans Koch (basscl), Axel Dörner (tp), Martin Schütz (cello), Norbert Pfammatter (dr), Philipp Schaufelberger (git), Christian Weber (b), Fabian Gisler (b) and many others.
www.michaeljaeger.ch

Maurus Twerenbold, born in Zug (CH) in 1988, studied jazz trombone at Hochschule Luzern Musik with Nils Wogram, Adrian Mears and Gerry Hemingway as well as composition with Ed Partyka. After completing the master studies in performance in Luzern he continued his studies with an additional masters degree in pedagogy at Jazzcampus Basel. As an exchange student he studied one year at the Conservatorium van Amsterdam with Eric van Lier and many other great masters. Maurus leads his own project „Maurus Twerenbold Non Harmonic Quartet“ and plays as a sideman in different groups like the Lucerne Jazz Orchestra, the Gamut collective, the David Regan Orchestra and the Lukas Brügger Jazz Orchestra. He is awardee of the Friedl-Wald-Stiftung 2012 and part of the „Generations Unit 2014“, the awarded band of the international Generations Jazz Festival 2014 in Frauenfeld (CH). www.maurustwerenbold.ch

Yves Theiler has started his on-stage activity already in his teen years and has been perceived as a prodigious musical talent, as he got selected to join the Swiss K&S Art high school for young talented instrumentalists. Devoted to both composition and improvisation, he is focusing mainly on new composing and arranging concepts for the jazz piano trio format. All along his career he was constantly exposed to different ethnic musical influences, which are reflected in his works. His piano trio “YVES THEILER TRIO” is more than a distinguishable mirroring of his musical talent and has brought him not only local and international recognition, but as well numerous awards and prices. Yves Theiler is as well the recipient of several scholarships and awards, an acknowledgment of his talent. Moreover, he is a highly demanded sideman in the European Jazz scene and maintains an open minded attitude towards different musical styles.
www.yvestheiler.com

Michi Stulz has been active in the European jazz scene for a good ten years. Already at an early stage, his sensitive, intuitive approach to music and his ability to always play in the service of the music made him a very highly sought- after drummer for a wide range of different groups, such as Christoph Irniger Pilgrim, Lisette Spinnler Quartet, Stefan Aeby Trio, Tobias Preisig, Luca Sisera ROOFER, R.I.S.S. and many more.

His involvement in concerts has taken him around the world. He has played in concerts and on tours in Japan, China, South Korea, Malaysia, Peru, Syria, Kosovo and all of Europe. He can currently be heard on over 30 audio releases. www.michistulz.com