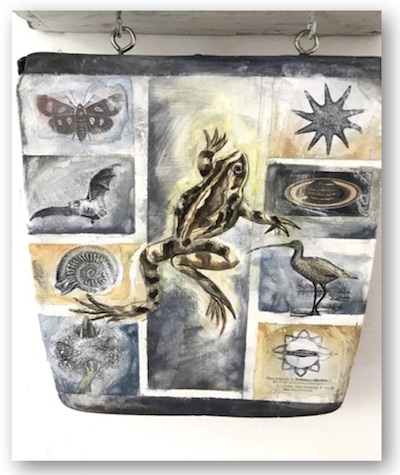 Notes from a small woodland…
During lockdown we became custodians of a piece of untamed land – originally marked on the 1906 record as a stock field. We pretty much named it straight away – Nuthatch Wood – as we quietly waded through 100 years of wildness hailed by a cacophony of bird song & calls letting us know we were on someone else’s territory. Untouched for over a century – nature has gradually reclaimed this triangle of once arable pasture land. Grass & wildflower seeds drifted in on the wind, brambles began, unchecked, their overwhelming growth success story, Jays & squirrels’ buried acorns & cobnuts – their forgotten winter store germinated into Oak & Hazel forest. One Mother Ash tree now has over 100 sapling children- a crowded crèche of trees competing for light & water. We call this Ash creche ‘the builders yard’ – Ash saplings grow straight & strong for round pole construction. With a stash of traditional woodland tools we made pathways in – following animal tracks up the hill, along the lower boundary, out to the badger set & granite stone pile. A natural dwelling area presented itself – a flattish opening to the sky with perfect tree branch formation for a temporary woodland shelter. The skeletal beauty of January trees, their majestic forms inspired the charcoal drawings, the campfire provided the drawing material. About this time I came across a book which was a revelation – ‘Wilding’ by Isabella Tree – the story of the ‘rewilding’ of Knepp Farm – an inherited family dairy & arable farm of 4500 acres – 60 miles from Brighton. The idea of ‘rewilding’ & how far it had come was new to me. A beautifully written book, documenting the first 15 years of an ongoing journey to gradually restore the land to a natural balance with nature taking the lead. Knepp Farm is now a flagship rewilding project providing a natural habitat for hundreds of threatened species of birds & insects. Great timing – the book opened up a philosophy of connection to nature, its preservation, giving the tools & words to reverse our dominance over nature. Rewilding our environment & the practice of restoring a natural balance – rather than dominance – enables us to establish a deep connection to nature – allowing us to also rewild ourselves.
Our unchecked superiority over species other than our own & our insatiable materialism have taken the natural world to crisis point. Being able to preserve a small piece of wilderness – work carefully with the seasons & natures rhythms using traditional methods gives great hope. Restoring our wildlife & natures balance can be done in anyone’s notebook & backyard.
This new work is a notebook from woodland & shore – inspired by identifying plants & animals in Nuthatch Wood & on the coastal path close by. It’s like getting your eye in – I had never really taken much notice of butterflies & dragonflies until sitting quietly by our newly dug ponds in the woodland – butterflies, damsel flies & dragonflies now abound! Species Identification seals the bond – naming & preserving – recording in pictures & words. We continue celebrating an abundance of species in this environment clear of man-made chemicals rather than lording it over other life forms!
‘such moments come to you in wild, remote places – it is as if the curtain that separates us from a broader vision is briefly lifted. Every now & then the process of sequential events & time falters and we look through a chink at the eternity that religions speak of. When this happens it’s such a startling experience that you hanker after it when you are back in the world of sequence.’ John Muir